This site uses cookies. Please confirm consent to use them by pressing the "Accept" button. You will always see information about your decision in the bottom of the website. Reed more

Accept
Do not accept 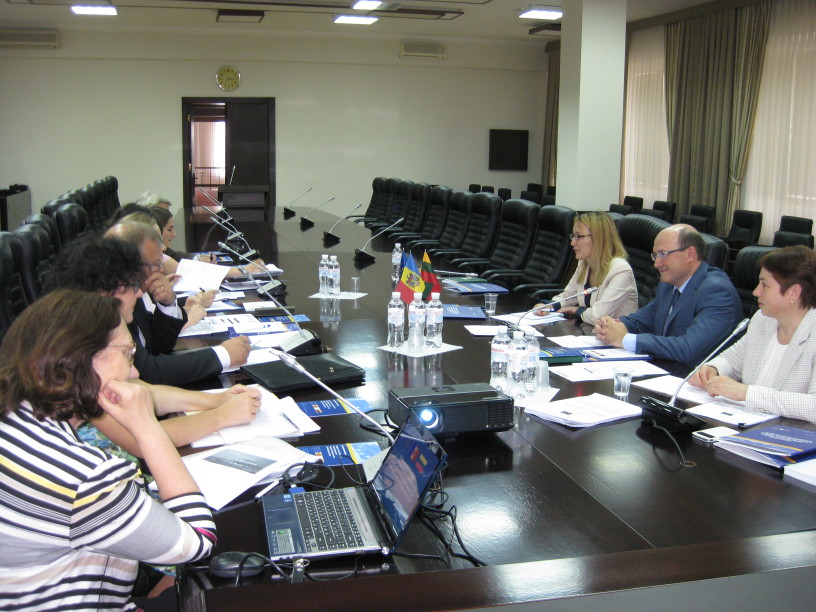 On 29 August, the Fifth Steering Committee meeting of the EU-funded Twinning project “Support to the civil service modernization in the Republic of Moldova in line with EU best practices” was organized at the State Chancellery.
The event that brought together representatives of all partner institutions of the project was focused on the carried out activities and achieved results during April-July 2016 – the fifth quarter of project implementation, as well as the objectives planned for the upcoming period.
Therefore, the welcoming speech was held by Mrs Tamara Gheorghita, Head of CPAR Division, who highlighted the importance and need to regularly organize the Project Steering Committee meetings for a successful implementation of the planned goals and objectives.
Mr Roman Cazan, Deputy Secretary General of the Government of the Republic of Moldova and Project Leader on behalf of the beneficiary institution – State Chancellery, thanked for the support provided to our country by the representatives of the EU member-state and the project partner of the Republic of Moldova – Republic of Lithuania.
In his turn, Mr Alminas Maciulis, Chancellor of the Government of Lithuania and Project Leader on behalf of EU member–state, reiterated about the support of his country for the Republic of Moldova that is being provided to achieve the ambitious objectives that were planned to implement the public administration reform, which represents a priority under the EU-Moldova Association Agreement as well.
Among the discussed subjects during the meeting was the launching of the Component 4, which refers to strengthening capabilities of top level management from ministries by organizing a series of trainings starting with the month of September of this year. Also, a Study Visit is foreseen to be conducted within this Component to several EU member-states where the State Secretaries from Republic of Moldova will have the opportunity to get familiar with organizational and institutional procedures related to the activity of the persons holding top level management positions.
Mrs Laima Tuleikiene, Resident Twinning Adviser of the Twinning Project, made a presentation on achieved results of the first three components during the reporting period, but also presented the planned activities to be organized until December this year.
The meeting was also attended by Mr Laurent Schwab, expert in monitoring EU-funded projects, who was undertaking a monitoring visit of the Twinning project. He also presented some preliminary findings on project implementation and several recommendations for the next 7 months of project duration.
At the end of the meeting, there were analysed opportunities to carry out additional activities within the limits of the available budget, which will cover a series of analysis of the normative and legislative framework on civil service in the Republic of Moldova, recommendations and proposals regarding the needed amendments and completions to the normative and legislative framework of our country in order to ensure a high-level of compliance with EU standards in the respective field.
„I would like to thank our partners from Lithuania for their openness and receptivity whenever we request some additional activities to be conducted under this project. We are very grateful for always delegating the best experts from the civil service, ensuring, in this way, a high quality level of project final results”, - said Mrs Tamara Gheorgita, RTA Counterpart of the Twinning Project.
The next Steering Committee meeting will take place in October and the agenda will cover a series of subjects related to project implementation.

This site uses cookies. Please confirm consent to use them by pressing the "Accept" button. You will always see information about your decision in the bottom of the website. Reed more

Accept
Do not accept